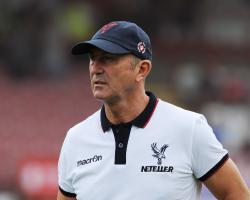 Palace's plans for the new Barclays Premier League season, which starts at Arsenal in Saturday's late kick-off, have been thrown into disarray after Pulis left the Selhurst Park club late on Thursday.

Pulis was named manager of the season for 2013/2014, having guided the Eagles to safety following his appointment last November at a time when the south London club were rock bottom, but went on to finish comfortably in mid-table.

Former Stoke boss Pulis had reportedly been left frustrated by the club failing to push through deals for various players he targeted to strengthen the Palace squad.

Palace issued a brief statement on Friday morning, which indicated Pulis had left by "mutal consent", with several candidates such as Malky Mackay, Neil Lennon and Tim Sherwood likely to be interested in the vacancy.

Wenger revealed there had been no indications of any issues when he caught up with Pulis at a pre-season Premier League managers' meeting at the start of the week.

"It was a complete surprise to me and what kind of consequence that will have on Crystal Palace, I don't know," said Wenger, who is the longest-serving manager in the top flight.

I don't really know why he left, but it took me by surprise.

"I have (never) seen that (manager leave so close to start of season) before, so you can always be surprised.

"I was at a managers' meeting on Monday with Tony Pulis and nothing indicated that he would not be here (on Saturday) afternoon."

Wenger added: "Maybe Tony Pulis was the manager of the season last year because he took the maximum out of his team during the period he was there - that is the real job of the manager."