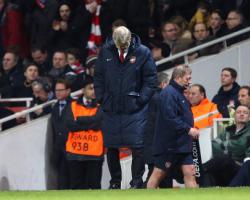 Wenger's side are on the verge of crashing out of Europe's elite club competition in the last 16 at the hands of Bayern for the second successive season following a frustrating first leg loss at the Emirates Stadium on Wednesday.

The result was hard to take for Gunners boss Wenger, who was infuriated by what he perceived as Bayern's theatrical attempts to influence Italian referee Nicola Rizzoli by making the most of any contact from Arsenal players.

Wenger's rant seemed harsh on Bayern, who made their class tell after an early wobble when Mesut Ozil's penalty was saved by Manuel Neuer before Arsenal goalkeeper Wojciech Szczesny was sent off for conceding a spot-kick with a foul on Arjen Robben.

Bayern's David Alaba missed the penalty, but Pep Guardiola's team eventually made their numerical superiority pay thanks to second half goals from Germany midfielders Toni Kroos and Thomas Mueller.

Wenger was convinced Robben had conned Rizzoli to win the penalty that swung the balance of the match.

The Frenchman made a diving gesture on the touchline just after the incident and stuck to his guns when asked to give his view on Bayern's antics.

"Robben made more of it," Wenger said

"We are not used to that in England

Fouls were given that are not given in the Premier League.

"The regret I have is he decided that Wojciech misjudged the situation, but there was no clear desire to make a foul.

It was a great game until half-time.

"The sending off changed the game, it killed it

Until then it was top quality, but in the second half it was boring, it was one-way traffic."

Bayern boss Guardiola wouldn't be drawn on Wenger's criticism, but he felt Rizzoli made the right decision with Szczesny's red card.

"I don't answer my colleagues," he said

"I saw it on television, it is a penalty

When it is the last man the rule is it should be a penalty and a red card."

Szczesny appeared to make an obscene gesture, presumably aimed at the officials, as he trudged down the tunnel following his dismissal.

But Wenger refused to comment on that ill-tempered reaction and also kept his cool when asked about Germany midfielder Ozil's tamely-struck ninth minute penalty.

The miss was symptomatic of an inconsistent first season at Arsenal for the club's record signing, with Wenger saying: "He missed a penalty with his style, what can I say?

We had three good chances, but to make them insecure we needed to score that penalty but he missed it.

"He was affected by it afterwards, you could see 10 minutes later he was still shaking his head

It had a huge impact on his performance."

While Bayern will be firm favourites to finish the job in the second leg in Munich on March 11, the Gunners did win 2-0 there last season, although that result wasn't enough to stop them bowing out on goal difference.

"It isn't over because we will fight until the end," Wenger said.

Guardiola finally got his first win as a manager at Arsenal, but he warned his players not to rest on their laurels in the return.

"After the clear penalty and the red card the game changed completely," he said

"We showed good patience when faced with nine defenders.

"Now we have to focus on the second leg

If we just go to defend the result everything can happen, so we have to be careful."