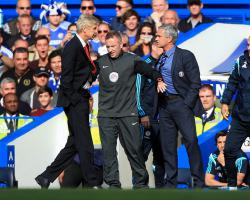 Wenger confronted Mourinho in the technical area just after a bad foul from Gary Cahill on Alexis Sanchez midway through the first half, the Frenchman afterwards accepting he gave the Chelsea boss a "little" push, which he defended.

The managers had to be separated at the time by fourth official Jon Moss, before they were called over by referee Martin Atkinson, who gave them both a stern dressing down and warned any further transgressions would see them sent to the stands.

Because the referee dealt with the matter as he saw it during the match, Press Association Sport understands the FA is unlikely to open a disciplinary case, unless the officials' report highlights something extraordinary.

The governing body are, however, expected to write to both clubs following the delayed kick-off by some 15 minutes after a flare was let off outside the entrance to the visiting end, which caused turnstiles to be closed so smoke could clear before allowing fans back into the corner of the Shed End.

Arsenal lost the match 2-0, and suffered a first Premier League defeat of the season.

The Gunners are eighth, but just four points behind second-placed Manchester City, although now nine adrift of leaders Chelsea.

It is Arsenal's second worst league start to a season under Wenger.

However, centre-back Per Mertesacker - who was caught out of position as Diego Costa broke away for the late second goal - believes Arsenal can learn from the disappointments of Sunday to push on again after the international break.

"We were much more competitive and we defended much better (than last season), so that is what we can take, but Chelsea were still better and we have to learn quickly," he said.

"At times we were good, but not good enough to score a goal.

"Defensively we made two wrong decisions and we missed the final touch in the last third and the final ball - that was the difference.

"We can take some positives out of this game but there's still something to do.

"We think so (we are in a better place than last season), but we have to prove it."