Wenger up for the challenge 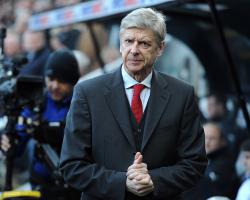 The Gunners - who have been hit by the loss of England forward Theo Walcott to a serious knee injury - have just a one-point lead over title rivals Manchester City and two on Chelsea, so should both clubs win their respective games at Newcastle on Sunday and Hull on Saturday lunchtime, then Wenger's men could well be down in third place.

It is not the first time Arsenal have faced up to such a scenario this season, as they were knocked off top spot before Christmas first by Liverpool and then City, before responding each time with victory to top the league again on New Year's Day.

Wenger admits it is not ideal having to sit and watch other sides look to crank up the pressure before they get the chance to kick-off at Villa Park, where Arsenal have not lost in the Premier League since 1998, but all factors teams have to face in the modern game.

"That is the disadvantage when you play last, but all of us have to deal with that situation and it is part of the Premiership as well to handle these kind of situations," said Wenger.

The Gunners may well be on the look out for some attacking cover following Walcott's injury which rules him out for the rest of the season and the World Cup, but Wenger has moved to play down suggestions a loan deal was in the pipeline for Real Madrid's Alvaro Morata.

Arsenal have also been linked with Fulham veteran Dimitar Berbatov, as well as a big-money transfer for Atletico Madrid's Diego Costa.

Wenger, however, continues to stress all the headlines will not help the XI he sends out against Villa.

''I do not want to speak about any specific names. For us it is important to prepare well and to win the game on Monday night,'' said Wenger.

''The people who are in the newspapers do not help us to win the game on Monday night. It is the players who play here.

''Nothing has changed because we are open to a possible solution and if something interesting turns up we will do it.

''It could be a loan as well yes, but we are not in talks with Real about anybody.''

On a positive note for Arsenal this week, midfielder Alex Oxlade-Chamberlain made his own return from a serious knee injury when he played the first half of the Under-21s fixture against Fulham on Thursday night.

The 20-year-old, who also harbours World Cup ambitions with England this summer, could be back on the bench at Villa Park facing the team against which he suffered the injury on the opening day of the Premier League season back in August.

''It is good of course to have him back, but he and Walcott are different types of players," said Wenger.

''Alex Oxlade-Chamberlain is a bit more of a midfielder and Walcott is more a striker type. One doesn't compensate the other one because they are different players."