Wenger up for the cup 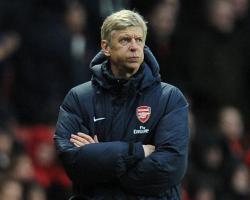 The Gunners - whose last trophy was some nine years ago when Patrick Vieira lifted the famous old trophy in Cardiff - crashed out 1-0 at home to Blackburn in the fifth round which all but ended any hopes of silverware.

This year, though, Wenger's squad head into the FA Cup leading the Barclays Premier League and determined to finally end almost a decade without success.

"I had the luck to win four FA Cups, that means I always put the effort in. I am very keen to do it again, it is a long time now," Wenger said.

"Honestly I still have in my mind the fact that we went out last year at home against Blackburn, that was not good enough for us and we have to make sure we absolutely put the effort in to have the chance to go through."

Aston Villa boss Paul Lambert may feel the upcoming Premier League showdown with Arsenal is of more importance than their own FA Cup ambitions this season, but Wenger would love to get his hands on the famous old trophy once again.

"We have not won trophies for a long time, it's an opportunity that we want to take that we consider," the French coach added.

"On top of that we have afterwards nine days until the next Premier League game, we can give absolutely everything in this game."

Wenger continued: "It is the beginning of January after a heavy schedule in the Premier League and you want to keep your focus and get into the competition with full power.

"We haven't drawn a small team, so we are warned that it will just be another top-level game and that is the advantage of having a big opponent - your team is focused naturally."

Spurs have found some form under new boss Tim Sherwood to record a hard-earned 2-1 win at Manchester United on New Year's Day.

Wenger said: "If you look at their overall record since the start of the season, it isn't a bad record at all, so I am not surprised that Tottenham can win football games.

"With (Roberto) Soldado and (Emmanuel) Adebayor, they have found a balance and at the moment that suits the team well.

"They always looked dangerous at Manchester United and that is certainly the pair that we will have to keep quiet."

However, Wenger is only concerned with what his team can deliver in Saturday's primetime TV late afternoon kick-off.

"My players are highly focused on this game and they are determined to win every single game they play, their attitude has been absolutely fantastic since the start of the season and will be like that tomorrow," he said.

"I would always adapt the team just to see if we have a good chance to win the game.

Wenger will wait to discover the extent of Nicklas Bendtner's ankle injury before deciding whether to bring in another striker during the January transfer window - but played down reports Arsenal were closing in on a Â£2million move for Dimitar Berbatov.

Lead frontman Olivier Giroud missed the 2-0 win over Cardiff on New Year's Day because of an ankle problem and has also been hit by a sickness bug.

Bendtner came off the bench to score with just two minutes left to finally break Cardiff's resistance, but suffered a sprained ankle when putting the ball past goalkeeper David Marshall.

Arsenal are examining the full findings of a scan and, following further consultation with specialists, are likely to have a clearer idea of the diagnosis over the weekend.

Wenger openly admits Arsenal will not rule out a move for a top-calibre player should the opportunity arise, but maintains as yet there has been no approach for former Spurs and Manchester United frontman Berbatov.

"He (Berbatov) is not a name that we have considered at the moment. We have not even been out on the transfer market, we have not contacted anybody," said Wenger.

"We are just analysing the situation, being very cautious until we are well informed about Bendtner and (Yaya) Sanogo as well, because he is back in training now.

"We will make a decision after that."