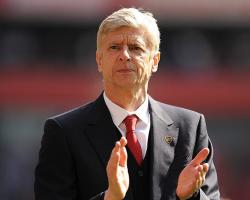 Wenger's side booked their place in Europe's elite club competition without kicking a ball when Everton lost to Manchester City on Saturday and the Gunners maintained the feelgood factor 24 hours later with a 1-0 win over West Bromwich Albion.

With fourth place wrapped up and a chance to end Arsenal's nine-year trophy drought coming soon in the FA Cup final against Hull, Wenger's future was the only issue that threatened to cast a cloud over an upbeat end to the campaign.

But the Gunners boss moved to head off speculation that he may accept a reported offer to join French club Monaco as he once again insisted he plans to sign an extension to a contract which expires at the end of the current campaign.

"I've said many times my word is my word

You will see me again," Wenger said.

"It's not linked to the FA Cup final

It was important, of course, to be in the Champions League -- that's for sure.

"I've had no moments of doubt

If I had moments of doubt it would have been a few years ago when I had to say no to many offers and commit to this club and I was under a lot of pressure."

Wenger didn't reveal when he will sign the deal or how long it will last for, but his commitment to the club he has managed since 1996 looks certain to extend for at least another season.

"Don't worry, don't be too impatient, my last time will come, you'll get rid of me one day, don't worry!" Wenger told the media with a wry smile.

Olivier Giroud's first half header was enough to see off lacklustre Albion and the victory ensured a positive vibe during the traditional lap of honour by Wenger and his players to mark their final home game of the season.

Arsenal's fans took the opportunity to call on Wenger to keep French right-back Bacary Sagna, who is out of contract in the close-season and has been linked with Manchester City.

Wenger said he will do everything he can to persuade both Sagna and Polish goalkeeper Lukasz Fabianski, also out of contract, to sign new deals, while also revealing on-loan Swedish midfielder Kim Kallstrom will return to Spartak Moscow at the end of the season.

"I want Sagna to stay and I hope the reception from the fans convinces him that we love him here," Wenger said.

Loic Remy, the QPR striker currently on loan at Newcastle, watched the win over the Baggies from an executive box, fuelling rumours the French striker could be high on Wenger's list of transfer targets.

But Wenger said: "Honestly, I've just been informed that Loic Remy was here.

"I have not invited him

I don't see any sign of us signing Loic Remy

I hope he's paid for his ticket!"

Wenger also blame Arsenal's failure to sustain their title challenge on a lack of firepower.

"I would just say, to be brutal in our first analysis, we missed a few goals, compared to the teams who scored the most goals," Wenger said.

Third bottom Norwich's 0-0 draw at Chelsea meant Albion, three points above the relegation zone but with a significant goal difference advantage, are effectively safe, barring two huge defeats in their last fixtures against Sunderland and Stoke.

Boss Pepe Mel's future is unresolved, but he said: "We're aiming to keep West Brom in the Premier League and I would be extremely happy to be here next season.

"After the Stoke match, we will have a meeting and then we will decide."