Wenger- We can beat City to title 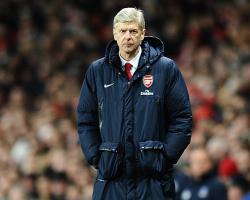 It looked all set to be another frustrating afternoon for the Gunners, held to a 2-2 draw at Southampton in midweek, following a dogged display by an Eagles side who are fighting for survival.

However, England midfielder Alex Oxlade-Chamberlain - fit again following five months out with a serious knee injury suffered on the first day of the season - finally ended Palace's stubborn resistance when he chipped in a fine pass from Santi Cazorla at the start of the second half.

Arsenal goalkeeper Wojciech Szczesny produced a brilliant save to deny Cameron Jerome an equaliser from a close-range diving header before World Cup hopeful Oxlade-Chamberlain struck again on 73 minutes to make sure of victory.

City host third-placed Chelsea on Monday night and so could once again knock the Gunners off the summit, and Wenger accepts many pundits see the title as City's to lose.

"I can understand that completely because we haven't done it for a while, and as well I must say that we face quality competitors," said Wenger, who expects to be without deadline-day loan arrival Kim Kallstrom for up to six weeks as the midfielder recovers from a back problem.

"We do not play against average teams and Man City have scored over 100 goals, so everybody thinks 'can you beat these teams?' I say yes, and that is what we have to show.

The only thing I can say is that after 24 games we are there, and it's now about how we finish the season."

Palace remain in a dogfight for survival, just a point above 18th-placed West Ham.

He said: "We want to keep our organisation and our resilience and want to show the spirit we have over the past couple of months, but those three hopefully will give us more of a threat."

Wenger, meanwhile, admitted he would probably not have signed Kallstrom if he had been aware of the injury earlier.

The 31-year-old suffered a "micro-fracture" while on warm-weather training with Russian club Spartak Moscow.

"I would not have signed him if we had two or three more days to do something, but it was Friday night at five o'clock, so it was (a case of) you (sign) nobody or you do it under these conditions," said Wenger, who was already without Wales international Aaron Ramsey for around six weeks.

"There is a possibility (that he may not play), but as well there is the possibility that he scores us the winning goal that might be vitally important."