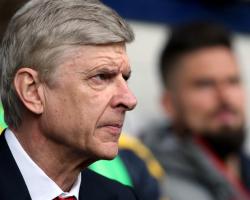 Wenger would not confirm what that decision was but the Frenchman is under increasing pressure with Arsenal's season on the brink of collapse after seven defeats in the last nine matches in all competitions.

The Gunners lost again on Saturday, a 3-1 defeat at West Brom leaving them in fifth place in the Premier League and five points adrift of the Champions League qualification spots.

It led to Wenger being asked questions again regarding his future - with his contract set to expire at the end of the season.