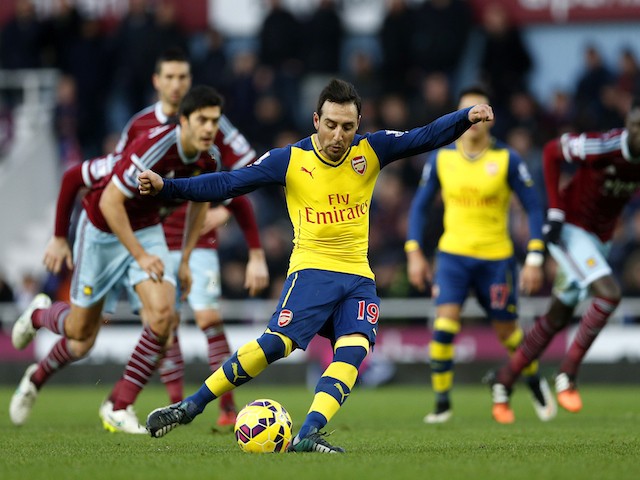 Laurent Koscielny returned to the lineup and he had a busy day, helping to neutralize the West Ham aerial attack and make the back four look a lot more solid.

West Ham got off to a quick start and “took” the lead through Alex Song, only for the referee to take the goal away.

The linesman flagged, correctly, the Hammers for offside and for being in the way of Szczesny’s view of the shot. Big Sam railed after the game about the decision (as did the sportscaster I was listening to), but it was the right call.

West Ham’s best chance of the half came to Tompkins, wide open on the side, but he smacked the ball high and wide.

Near the end of the half Arsenal struck. Cazorla got lucky dribbling into the box when the ball deflected back to him when it seemed as if he’d lost it. Breaking free, Winston Reid stuck out a leg and tripped him.

There was no argument about who would take this penalty. Cazorla hit a beauty into the corner.

West Ham had just started the inquisition into how they’d conceded the first, when Arsenal struck again.

Oxlade-Chamberlain play a one-two with Cazorla, powered to the byline and sent a cross into  the middle where Welbeck scored his first goal in ages.

Big Sam tried to boost the Hammers at the half and they came out more aggressive in the second half, pushing for an equalizer.

Arsenal, though, were stingy and restricted the Hammers to few decent chances. With the exception of their goal, the only chances on goal were a clearance by Mertesacker from Carroll and a Szczesny save from Nolan.

West Ham did score, Kouyate beating Debuchy to a header and getting a friendly deflection, and they had ample time to fashion an equalizer, but only managed several dangerous crosses that nobody met.

Arsenal were the far more dangerous team and one feared that their poor finishing would be punished near the end … but it wasn’t.

Adrian, the West Ham keeper, kept the Hammers in the game with a series of fabulous saves off shots from Cazorla and Welbeck and a terrific header from Oxlade-Chamberlain.

Arsenal kept their poise and won when many of their rivals lost or drew.

Szczesny 7.  A good game for Szczesny who was solid dealing with the crosses and high balls that came his way. Only once, near the end, did he fail to make good contact with a punch, but the Hammers knocked the ball over the bar. He had very few saves to make, but had a tricky shot to save from Nolan which swerved at the last minute.

Debuchy 6.  A solid game, but he had his hands full dealing with Valencia in the second half. He didn’t get forward as much as he did against QPR. Was beaten by Kouyate to the cross on West Ham’s goal.

Koscielny 8.  A dominant display. Made a number of key interceptions and interventions. We play so much better when he plays. He also appears to be our free kick taker, which is a little surprising.

Monreal  6.  He had a tough afternoon dealing with Amalfitano, but battled on.

Flamini  7.  A good game for Flamini, who helped protect the defence.

Coquelin 7.  Acquitted himself well in his first Premier League start of the year. He was more effective in the first half than the second. His passing looked good and he was always willing to throw his body into the action.

Cazorla 9.  Santi loves to play West Ham. He was my man of the match, although Kos and the Ox were excellent as well. He won the penalty and dispatched it with style. He hit a wonderful shot which Adrian saved, he hit another from the side, which was saved and he got the ball again but hit it over the bar. As space opened up, he became more and more dangerous.

Oxlade-Chamberlain  8.  Didn’t expect him to play until the New Year, but the Ox delivered one of his best performances. He disappeared for awhile in the first half, but still popped up with an assist. In the second half, as space opened up, he became almost unstoppable. Adrian denied him a goal after a fine header. He was somewhat wasteful at times, hoofing the ball high and wide more than once, but he was a handful for the West Ham defence.

Welbeck  8.  Scored his first goal today, but he could have had more. Had one memorable run in the second half, but he could only hit his shot wide of the goal. He was a little wasteful a couple of times, but he provided a lot of effort and speed.

Sanchez  8.  Didn’t score and didn’t get an assist, but delivered a top class performance. Yes, he was wasteful and he did make some poor decisions, but he stretched the Hammer defence a number of times and he worked hard on defence.

Gibbs 6.  Came on for the last ten minutes to provide more defensive stability.