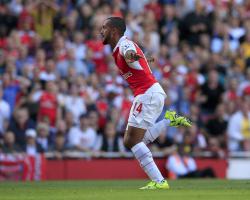 Arsenal's victory against Stoke City put them in fourth position just five points behind the leaders Manchester City, but Walcott insists there is still a lot more to come.

ÃâWeÃâve got a tough four away games now but this is going to test the squad to its full ability, IÃâm sure,Ãâ the England forward said when speaking to Arsenal's official website

ÃâItÃâs always great to start the Champions League - itÃâs when everyone starts to get even fitter and sharper.

ÃâWeÃâre competing in the Premier League, the best league, and in the Champions League against the best players in the world

Away from home, itÃâs always difficult to play your first game but I think it will do us a favour to be honest

Everyone just needs to recover well.

When people say weÃâre not playing great, weÃâre starting to get to where we want to be

That's the sign of a good team, if youÃâre steady going but you're getting the results.

ÃâItÃâs all about results at this moment in time, getting the three points

No one is going to remember the start of the season

So this Arsenal team can go far if we really actually believe in it, and a lot of the players do at the moment.

WeÃâve had seasons where weÃâve had very bad injuries but thereÃâs a lot of competition for places now which is healthy for the team.

ÃâWeÃâve got a lot of competitions which we are in and we want to compete in those, compete in the Premier League, to challenge for the title this time

We just need to worry about ourselves and weÃâre slowly climbing up there.Ãâ

Arsenal will travel to face Dinamo Zagreb on Wednesday before they play against Chelsea, Tottenham and and Leicester City in the space of 10 days.