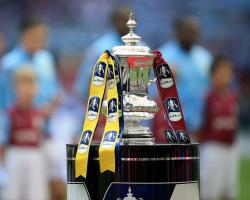 The two sides met in the Barclays Premier League at the Emirates Stadium on Saturday, with the Gunners recording a 3-1 victory.

If part-timers Whitehawk come through their replay against Dagenham & Redbridge, their third-round debut will see them face top-flight opposition in Everton at Goodison Park.

Sixth-tier Whitehawk were one of four non-league teams to feature in the draw made in Cardiff on Monday night.

The lowest-ranked among them, Salford City, will host Sky Bet Championship Derby if the seventh-tier club get past Hartlepool in their second-round replay.

Eastleigh, the only one of the quartet to have made it through outright, were handed a home tie against Championship basement boys Bolton, while the draw also pitted the winner of Grimsby's second-round clash against Shrewsbury - being played on Monday night - to face Cardiff away.