​Arsenal's 1-0 defeat away to Everton on Sunday was a blow to their hopes of securing a top four finish this season, but was also the latest instalment in the Gunners' struggles on the road.

A Phil Jagielka strike was enough for Everton to seal all three points at Goodison Park as Unai Emery's side failed to respond to the early setback, with their defensive struggles matched by a lack of invention or purpose going forward.

The Gunners had built strong momentum with recent wins over ​Manchester United and ​Newcastle which had at one point lifted them above ​Tottenham and into third in the Premier League table, but ​Arsenal now face a tougher battle to keep hold of their top four spot.

Arsenal are one of only two teams in the top four tiers of English league football this season without an away clean sheet, along with Championship side Ipswich Town, according to ​Opta.

Emery's side have now lost seven league games this term, six of which have come on the road. If the Gunners' away form was more closely aligned with their strong showings at the Emirates, they would certainly be title contenders. 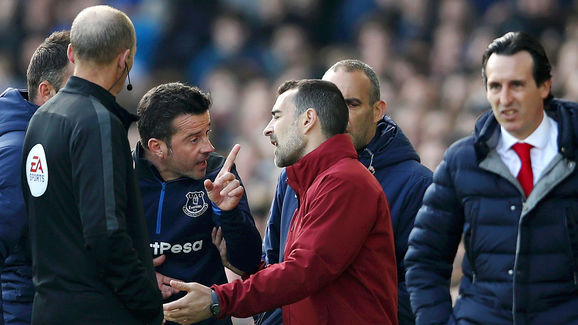 Instead, it is Arsenal's shortcomings on the road which have left the Gunners clinging on to their place in the Champions League spots on goal difference with six league games remaining.

On paper, Emery's side have the easiest run-in out of their top four rivals, as they do not have to play any of the other 'big six' in their remaining matches.

However, four of their last six outings are away from home, and that poses a big problem to Arsenal's hopes of Champions League qualification.

Sunday's performance at Goodison Park proved once more that the Gunners are very much a 'Jekyll and Hyde' team. Having produced such a dominant display in the 2-0 victory at home to Newcastle on Monday, they simply never looked like threatening ​Everton on Merseyside six days later.

Sloppy defending has often undermined anything good Arsenal may have about them at the other end of the pitch, and that was the case once more against the Toffees.

A simple long throw caused the Gunners' rear-guard all kinds of problems in their own box, as they scrambled to clear before the ball fell at the feet of Jagielka, who had the easiest of tasks in effectively putting Arsenal to the sword. Arsenal lost all cohesion from that point on as Everton grew in confidence and reminded Unai Emery that there is still much work to be done in ridding his side of a soft underbelly which consistently results in away day blues for the Gunners.