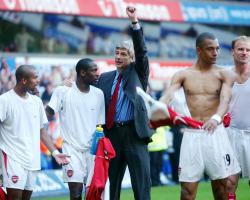 So can the trophy be brought to the Emirates for the very first time, certainly Arsenal Manager Arsene Wenger believes they can ÃâItÃâs our target and we have a chance in a very competitive league,Ãâ Wenger said

We have a good cohesive group with the ability to do better.

There's no doubt that Arsenal have all the credentials of a title winning side, they have world class players and title winners throughout, the likes of Alexis Sanchez Mesut Ozil and new signing Petr Cech not to mention a manager who has won the Premier League three times with the Gunners, but they are lacking in one major area, a world class striker

When was the last time a team won the league without a prolific goalscorer upfront? Sergio Aguero, Diego Costa, Wayne Rooney, Didier Drogba and back when Arsenal won it last, Thierry Henry

One striker that could answer that question is Karim Benzema, a striker who is a consistent goal scorer and given the right service could definitely get 20+ goals for the gunners.

Another area where Arsenal are lacking is leadership, no more evident than in the first game of the season where they lost 2-0 to West Ham

Confidence would have been high coming into the first game, with the signing of a world class goalkeeper in Petr Cech not to mention Wenger finally getting the better of Jose Mourinho as Arsenal beat Chelsea 1-0 in the community shield

That confidence appeared to have disappeared come Saturday, Arsenal looked flat and unquestionably lacked that urgency and tempo, not helped by Cech's errors for both goals

When you look amongst Arsenal's ranks it's hard to spot any real leaders, once again when you look at previous title winners in recent years John Terry, Vincent Kompany, and Nemanja Vidic it's hard to see them winning the title without one.

I believe that Arsenal still need one or two new signings to finally win back the title, the Premier league is getting more and more competitive each year with the top clubs boosting their squads to give themselves the best chance of winning the league, but with only two trophies in the last ten years how much more patience do Arsenal fans have before Wenger may have to finally call it a day.