Wilshere in contention for Gunners 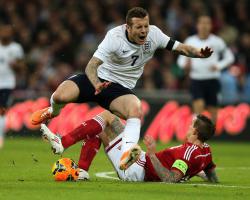 Wilshere has not featured since suffering a fractured foot while on international duty in the friendly against Denmark on March 5.

The 22-year-old should be involved in some capacity at Carrow Road against the all-but-relegated Canaries, before then looking to sharpen his fitness ahead of the FA Cup final and England's pre-World Cup training camp in Miami - provided he is picked in Roy Hodgson's squad.

"We have everybody who played against West Brom available

We could have the return of (Aaron) Ramsey and Wilshere could be in the squad as well for Sunday," Gunners boss Arsene Wenger said.

"I don't know (how much game-time Wilshere will get).

"He will be ready for the World Cup

For the rest, I do not want to make an individual case of anybody.

"What is important is the team and that we prepare well as a team."

Oxlade-Chamberlain is another Arsenal player hoping to be on the England jet to Brazil.

The midfielder - who missed several months with a serious knee injury suffered in the first Premier League game of the season - has been hampered by a groin problem, and will not be rushed.

"He has not at all practiced with the first team," Wenger said.

Full-back Kieran Gibbs has not played since the FA Cup semi-final penalty shoot-out win over Wigan because of a hamstring injury, but is set to return this weekend having joined full training again.

Despite Norwich, because of a far inferior goal difference, effectively being down after Sunderland won against West Brom on Wednesday night, and Arsenal already secure in fourth spot, Wenger maintains there will be no let-up ahead of the FA Cup final on May 17.

"We go there to try to win the game," Wenger said.

"We want to finish on a high

We want to make 79 points, as I said last week, to make it as tight as possible to the top.

"I think we had a good away season apart from some big games, but overall we were very consistent away from home and it is important we finish well away from home."

Wenger revealed there had been no progress on contract talks with full-back Bacary Sagna, who is free to leave in the summer.

If he goes, we will accept it

We will accept it and respond," Wenger added.

The Gunners boss is also yet to pen a new deal, although it is expected he will stay on.

Asked when an announcement could be expected, Wenger replied: "When it is done.