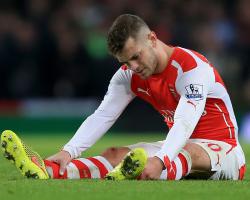 Wilshere has had a long spell on the sidelines as he has recuperated after surgery on his troublesome left ankle, an injury he suffered in the defeat to Manchester United on November 22.

It was the latest setback in a succession of injury problems for the England international but he is now nearing full fitness.

And the 23-year-old started alongside Mikel Arteta and Abou Diaby in a formidable line-up as the second-string side defeated Stoke 4-1 at the Emirates.

Playing the full 90 minutes was a timely confidence boost for Wilshere, who is now keen to force his way into Arsene Wenger's team ahead of the end of season run-in, with Arsenal battling on both Premier League and FA Cup fronts.

"You can train as much as you like but you can't get that match fitness unless you play," Wilshere told Arsenal's official website.

"In the Premier League you know how quick it is so you have to get back to that speed.

"I feel like I'm ready to play some part

When you're injured you look at your comeback date and the games around that time.

"The one that stands out is the FA Cup semi-final but even before that we've got big games and we've got to got to Man United as well so there's a chance to play this season."