Arsenal suffered a major blow in the battle for the top four as they were mauled by a clinical Wolves side 3-1 at Molineux on Wednesday night.

In a frenetic opening period, Ruben Neves opened the scoring for Wolves with a trademark wonder strike. After Jonny was brought down just outside the box by Nacho Monreal, Neves rifled in the resulting free-kick from 25 yards out and into the far corner of the net. ​ Things went from bad to worse for Arsenal when Jonny's cross was met with a glancing header from Matt Doherty and past goalkeeper Bernd Leno for his eighth of the season. And if the Gunners thought their first half nightmare was over, Diogo Jota had other ideas.

A loose pass from Granit Xhaka saw Jota pounce, with the Portuguese star driving past Sokratis to fire home from a tight angle to make it 3-0 and leave the Gunners well and truly shell-shocked.

Despite Arsenal producing a better second half performance and gaining a late consolation courtesy of a Sokratis header, Unai Emery's side never really looked like getting back into the game and, with defeat, find their top four hopes no longer in their own hands.

The big question coming into the game from a ​Wolves perspective was whether Nuno Espirito Santo's men were already kicking back at the beach. With another season of ​Premier League football secured, would Wolves produce the same high-intensity performance they have put in against the other top sides?

Well, those questions were immediately answered in the first half as they saw off a fine start from the visitors and capitalised clinically. Neves' free-kick set them on their way before Doherty continued his fine goalscoring form from right-back with a header to put them two up.

Jota's goal then poured salt on the Arsenal wound, with the second half virtually made a no-contest despite a late consolation from Sokratis. With Watford to come next, thoughts of securing a remarkable seventh placed finish in their first season back in the top flight is very much on the cards.

STAR MAN - The star of Wolves' promotion from the Championship last season, Jota has well and truly stamped his authority on the Premier League.

The winger was effervescent in his work off the ball and was a constant menace with it, with his direct dribbling and willingness to take people on marking him out as a constant danger.

The 22-year-old relished the opportunity to almost play up alongside Raul Jimenez as a front two on occasion, and took his goal with aplomb. A star in the making.

I would have Jota at Arsenal over every single one of the attacking midfielders at the club. Wonderful, wonderful player. Exactly what Arsenal need, but they need three of him. Unai Emery's side virtually shot themselves in the foot in the race for the top four in the 3-2 loss to Crystal Palace on Sunday. The first of three difficult-looking away fixtures remaining in their Premier League season, the Gunners knew they had to make up for their Emirates setback on Wednesday.

But after a start in which they seemed on top, Neves' free-kick seemed to completely flatten the mood in the ​Arsenal camp, with the Molineux side's second and third almost seeming inevitable. Questions about their mental strength away from home were once again asked, and once again the Gunners failed to provide the answer. With the Europa League still there as a safety net of sorts, it may be time for Emery to fully prioritise the competition and start thinking about resting players in the Premier League, starting with Sunday's clash against Leicester.

STAR MAN - In arguably Arsenal's worst performance and result in Unai Emery's first season in charge of the club, Lucas Torreira was the only player who could hold his head up high.

The Uruguayan was the one Gunners star who seemed to match the hosts' intensity, and his full-blooded challenges were the benchmark the rest of his team needed to match. 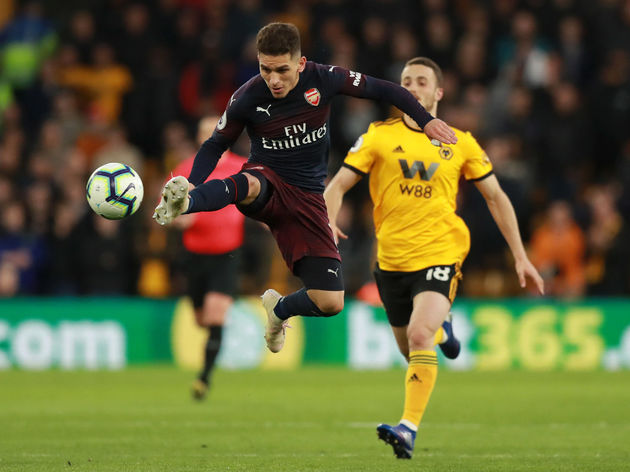 Unfortunately for the 23-year-old, he was alone in his venture, and his substitution before the hour mark was surely to preserve him for the games ahead. The midfielder needs to stay fit and healthy if the Gunners are to make the Champions League next year.

With the Premier League season winding down to its dramatic close, both sides have a quick turnaround with Wolves entertaining fellow high-flyers Watford on Saturday, and Arsenal travelling to Leicester the day after.