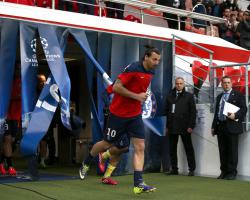 The 33-year-old was reported to be a target for Arsene Wenger after the French manager was spotted in Paris, the Arsenal boss wanted to sign Cavani but his bid was rejected by Laurent Blanc so he then made an initial inquiry about the Swedish striker.

However, when he was asked about the move to the Emirates Stadium he said "No, so the interest that existed, I have not committed myself to.

"It is [agent] Mino [Raiola] who takes care of the pieces

But this summer I have been resting up, I enjoyed the holiday.Ãâ

"[The interest] was concrete from their [Milan's] side," Ibrahimovic added.

"[There was] a lot of interest but I said from the beginning that I will stay with PSG.

"I like it, we have a good team, my family feel good and itÃâs just positive with Paris and PSG

"I know that Milan were a bit desperate."

Ibrahimovic is out of contract at the end of the season and PSG chiefs were reportedly happy to cash in.